Europe Holds Its Breath For MiFID II. But How Ready Are The Buy Side?

As I write at my desk here in London, a spooky and peculiar cloud of dust has cast a red shadow over the city, a side effect from the remnants of Hurricane Ophelia heading towards the UK from the Atlantic Ocean. While this has left London with a physical cloud hanging overhead, a hypothetical cloud is looming over the city in the form of MiFID II.

In my role at Worldwide Business Research (WBR), I have had the enviable (or unenviable depending how you look at it….) position of getting a 360 degree view on how the full value chain has taken different approaches to prepare for the latest regulatory regime. Years of preparation have gone into MiFID II implementation, and with the deadline now on the horizon, there will be no looking back come January 3rd. You must be ready. 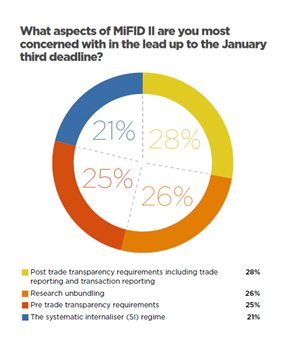 Most alarmingly for the London financial community and European financial regulators, results from our recent Fixed Income Leaders Summit Benchmark Report suggest that this is not the case. A mammoth 66 out of 100 buy side respondents stated that they did not believe their firms would be MiFID II compliant in time for the January deadline, with the biggest areas of concern being post trade transparency requirements and research unbundling.

But what are the biggest steps the buy side are taking? What should you ensure you have in place as the scramble for compliance reaches its climax?

Data, data, and more Data
Implementing new technology is the biggest priority for buy side heads in 2017/18. However, within this, increasing access to fixed income market data is by far the most important criterion.

With new reporting and transparency laws coming through in the form of RTS28, it is essential that as a buy side firm you can capture more efficient sources of data for increased market colour, and have the ability to accurately price and ultimately prove best execution to both your clients and regulators. Additionally, with investors becoming more tech savvy, the buy side can gain the edge on their competitors with new best execution policies and the confidence to show end clients you are performing towards their best interests.

It is fair to say that if you are a market data and TCA provider, now is the time to offer a solution to the buy side; the market has the demand and improved data capture is now essential in a buy side’s technology workflow. 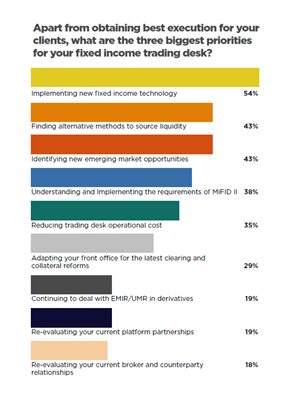 Adapting to a new market order
Rather than upsetting the applecart, it has been completely turned on its head. Market participants now believe that the buy side are the biggest providers of liquidity, shifting from the sell side pre-2008 crisis.

An early knock on effect of MiFID II has been the fragmentation of venues across the fixed income spectrum. In a traditionally OTC market, the push for increased transparency and electronification within MiFID II has led to a plethora of new platforms and liquidity hubs breaking through. Traditional players such as Tradeweb, MarketAxess and Bloomberg still lead the way, but there are many new solutions being offered in the market. Examples such as Liquidnet’s ‘dark pool’ offering and BGC’s movement into D2C markets show where the status quo is being challenged, in which new firms have pushed the boundaries of innovation. As a result, the buy side are constantly monitoring new solutions to improve access to liquidity. 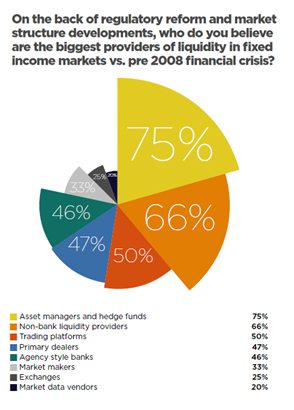 In today’s fixed income market place, numerous trading protocols and access to multiple liquidity hubs is at the forefront of the buy side need, and is also essential for looking at the most appropriate avenues to achieve best execution when trading.

A connected world
While partnering with new solutions and platforms initially took priority for the buy side, connectivity has become key. A flexible OMS and EMS system has become essential with the buy side looking to incorporate new workflows and technology into their workflow. The OMS/EMS providers themselves have some catching up to do in order to bridge the gap between where we are now, and where we need to be with more flexibility and dynamism.

Additionally, in times of increased uncertainty in markets dominated by Trump, Brexit and rising interest rates, navigating fixed income markets has become increasingly complex. We have seen the need for new communications tools come forward beyond the traditional forms of Bloomberg chat, which have all been driven by the buy and sell side directly.

There is now an unprecedented need for specialized communications technology to enable market participants to achieve their goals of price discovery, best execution, alpha generation and risk mitigation.

MiFID II is going to represent one of the biggest changes the city of London has seen in a long time. And as this dusty red cloud subsides from London and the view here becomes clearer, it is fair to say that MiFID II will leave a much longer lasting impression.